This is How NOT to Touch Someone in Public; New York Post interview

Home/Interview, Relationships/This is How NOT to Touch Someone in Public; New York Post interview
Previous Next

This is How NOT to Touch Someone in Public; New York Post interview

There’s apparently three things the people of the world can all agree on when it comes to touch: Partners, yes! Strangers, nope! Family, weird.

A new study from Oxford University released Wednesday came to the obvious conclusion that whom we allow to touch us depends on our emotional connection and the relationship’s context.

Researchers showed 1,368 people from Finland, France, Italy, Russia and the UK a map of the human body, front and back, and had them indicate with coloring tools what body parts are fair game for friends, family, partners, acquaintances and nobodies to pat, shake or grope — and what is definitely off-limits.

“We may perceive a touch in a particular place from a relative or friend as a comforting gesture, while the same touch from a stranger would be entirely unwelcome,” professor Robin Dunbar, who led the study, told the UK’s Telegraph.

Although the results were close country to country, the Brits proved the stiffest when it comes to contact, while the Finns were the most free-wheeling, surprisingly beating out those romantic Italians.

The data says that partner relationships, assumed to involve some level of intimacy, have the fewest taboo areas — though men still consider some areas, such as their legs, feet and backside, untouchable, even by lovers.

“When you really think about it, men have less physical contact, unless it’s intimacy,” says Susan Winter, an NYC-based relationship expert and author of “Allowing Magnificence.”

“Men aren’t as physical with each other.”

But, it turns out, they’re fine with physical contact with a stranger — as long as it’s a female.

According to the study, most women are not particularly into male acquaintances wrapping an arm around their midsection.

We may perceive a touch in a particular place from a relative or friend as a comforting gesture, while the same touch from a stranger would be entirely unwelcome.- Oxford professor Robin Dunbar

This was proved at the Oscars in February, when John Travolta grabbed the waist of actress Scarlett Johansson. As he kissed her on the cheek, she stood there in total discomfort, grimacing. 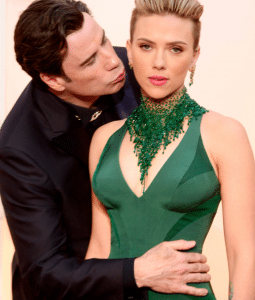 Travolta commited not just one, but two cardinal sins. “I would guess that kissing a stranger on the cheek would still make a lot of people uncomfortable,” says Dunbar.

The women surveyed are totally fine with their partners making physical contact with just about any spot on their body, however. Even mothers, sisters and female friends get a pass when it comes to intimate touch.

It was a finding that surprised Winter. “Women

[are] modest, and our body is the outward sign of our sexuality. If you cross a boundary, we clearly know it.”

However, one New Yorker who experiences the close quarters of the subway on her daily commute thinks this Eurocentric study could get a touch of Big Apple reality.

“We are constantly in contact with other people — like it or not,” says Upper West Side resident Bridgette Alayne, 31, noting the inevitable contact that happens on a crowded subway car.

“People are people, and no woman is gonna be like, ‘Yeah, I don’t care who touches my breasts,’ but I do think a New York specific survey would render different results from Britain, for sure.”

Where it’s okay to touch someone, based on your gender:Modal Trigger 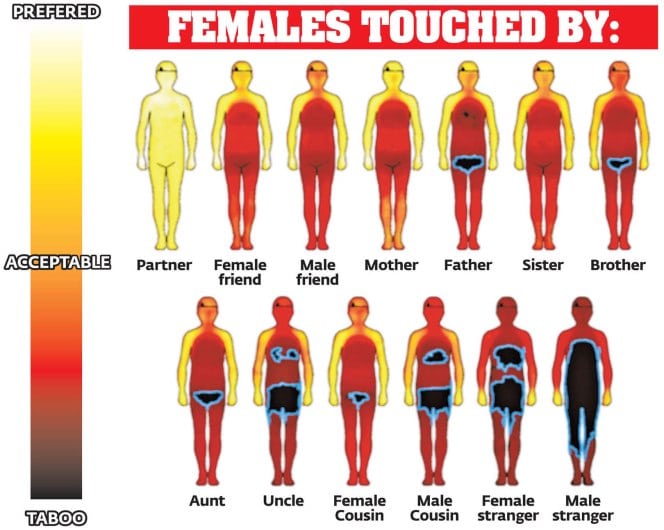 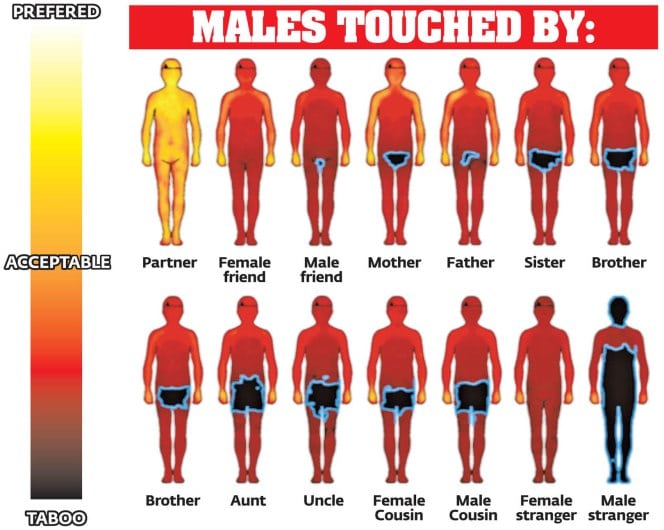