OK, deep breaths, y’all… especially if you’re a Belieber. It appears as though Justin Bieber and his fiancée for all of 20 seconds, Hailey Baldwin, may have secretly gotten married. On July 30, the model stepped out in NYC rocking what looked like a wedding band — when just one day earlier she was still sporting her engagement ring. You can check out the ~compelling~ evidence below. 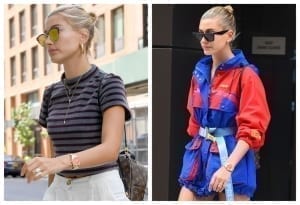 If Hailey’s blatant jewelry swap wasn’t convincing enough, Cosmopolitan reported that Hailey and Justin were spotted meeting with a pastor for “church services” on the same day. You know what sort of church services require a wedding band? A WEDDING.

TBH, we should have seen this coming. After all, Biebs practically told the paparazzi what the couple was up to that very morning. According to TMZ, the “Sorry” singer dropped a major wedding date hint on July 29 and apparently, he wasn’t bluffing.

“What’s next?” one photographer asked the 24-year-old of his future plans. “Getting married,” Justin replied without hesitation. Talk about taking things literally, huh? Oh, and did we mention he was adoringly glancing at Hailey as he answered? What sneaky lovebirds!

Justin and Hailey are seemingly the first out of a string of celebrity engagements — including Ariana Grande and Pete Davidson — to actually tie the knot. “There’s nothing wrong with a speedy engagement. It’s normally the time frame for a speedy marriage that comes into question,” relationship expert Susan Winter explained to Life & Style. Yikes.

That said, there have been no reports or pictures of Justin wearing a wedding band… so, who knows? Perhaps Hailey was just taking hers out for a casual test drive around town? If they did in fact get hitched, here’s hoping that pictures of the beautiful bride in a white dress surface soon!